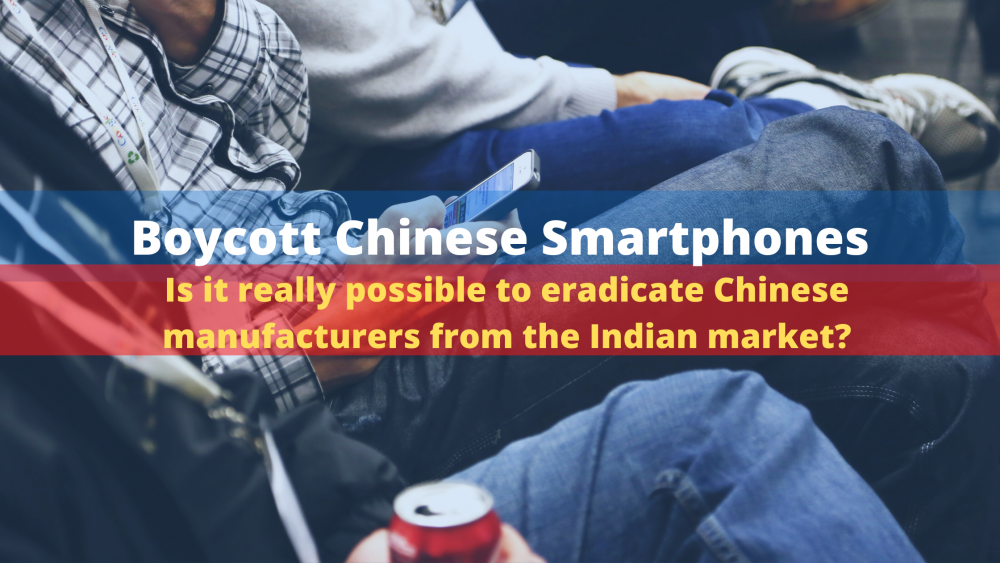 Since the Modi government came into power, they had laid much stress into its “Make in India” campaign. After all, they retained their seat of prime minister by promising jobs galore by rapid industrial growth. On top of that, the recent clash with China has made a social media buzz where people are emphasizing to boycott Chinese products. Even such tags can be seen trending on social media sites as well. Also, who can forget that “Aatma Nirbhar Bharat” slogan that our PM gave in the recent speech where he was addressing the nation to fight against COVID-19.

Because of all these incidents, many people are urging Indians to boycott Chinese products and replace them with Indian brands or others like Samsung or Apple. But the question is, is it possible to ban Chinese products in India? Or do we have made in India smartphones?

Well, I decided to conduct research and what I got to know was shocking.

So, if you don’t have time to read this entire article, then for you the short answer is No. We don’t have made in India smartphones. We cannot boycott Chinese smartphones.

Let’s dig in a bit deep-

It is shocking to see that the Indian smartphone market is dominated by Chinese manufacturers, with over 73% of market shares. None Indian manufacturers can be seen in this list.

These are the top 10 Indian manufacturers. The list seems good and contains some popular names like Micromax, Xolo, Lava but let me tell you the dark secret of these companies.

I know most of you were thinking that why I am addressing this here. It is normal to copy things in the smartphone market, right?

Okay, let me tell you something that shocked me.

Micromax or YU didn’t even assemble those smartphones in India. They directly imported those smartphones in bulk and then rebranded them with their name and logo and sold in the Indian market at a higher price. And this is not the case with Micromax only. Almost all the Indian manufacturers like Lava, Karbonn, Intex and others are doing the same. They straightway order smartphones from china, rebrand them, and then sell at the Indian market by saying it is made in India product. Remember, Micromax had the second largest market share in 2014 with approx 18% of market share. Source – CounterPoint

They use Chinese smartphones, with their designs, their material and later brand it as made in India.

This is something that pissed me off about Indian smartphone manufacturers.

In China, there are a lot of ODMs (Original designers and manufacturers) that designs and manufacture smartphone at their factories for brands to relabel and resell. One such ODM was Topwise who were used to make smartphones for Micromax. Later, they launched their own brand Comio in India to sell smartphones directly.

Back then, the business strategy of Indian brands was simple. They just buy the smartphones in bulk from China, rebrand them and then sell in India at a higher price. Such Indian companies never invested in plants where they can make MediaTek or Qualcomm processors. Also, they didn’t invest in software development, providing quality value for money product, or after-sales services.

When the Chinese manufacturers saw the potential and opportunity, they decided to jump into the Indian market. Such Chinese companies like Xiaomi, Oppo, RealMe came up with better quality products at an affordable price. They fulfilled the requirement of Indians, and right now, they are leading the market.

The “Make in India” initiative

The make in India initiative by the Indian government was really a wise decision. It has paid some excellent dividends in the past few years. Also, this made in India or if we say clearly, assembled in India is good for us. It is helping the economy, creating employment for Indians, and it helps to create an ancillary industry. Also, it attracts foreign investors to invest in India. Didn’t you see that most of the foreign companies came to India in recent few years?

Is it wrong to buy from Chinese manufacturers?

I know this statement would sound controversial, but I don’t think there is anything wrong with buying smartphones from Chinese companies. Remember, so-called Indian smartphone companies will also buy smartphone parts from China because they have manufacturing plants where they build essential components such as display panels, processors, motherboards, RAMs, and others. Our Indian manufacturers are going to do the same. They will import the parts from China, and then they will assemble them under their name and sell it by using the sentiments of being an Indian company. Whether you buy a smartphone from Chinese manufacturers or buy from Indian companies, China will get monetary benefits.

Is it possible to eradicate Chinese products from the Indian market?

Of course, yes. But not now.

Right now, China is the leading manufacturer of smartphone parts. Doesn’t matter how much try, you will end up owning something that was built or manufactured in China. The only solution is deploying the manufacturing plants in India. But again the question arises, would Indian companies invest that much? Well, I am also looking for an answer to this question.

With that said, here I am signing off. Let me know what do you think about it.